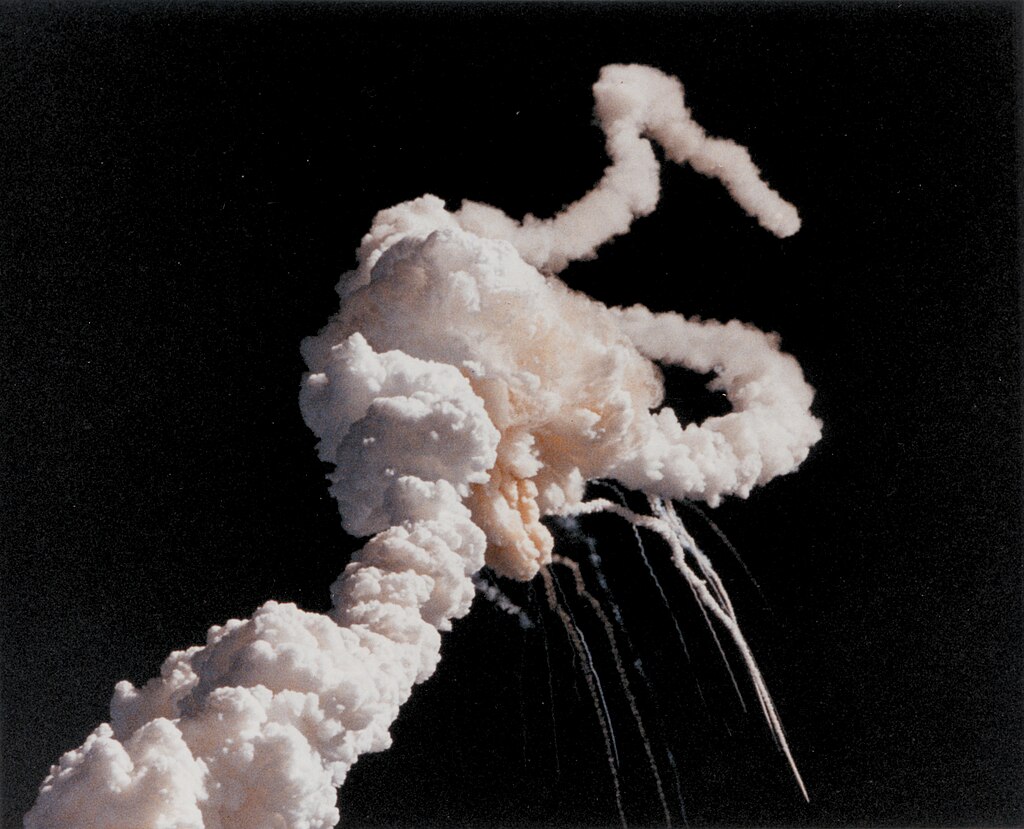 It Was Called “The Science”

“For his honesty and integrity leading up to and directly following the shuttle disaster, Roger Boisjoly was awarded the Prize for Scientific Freedom and Responsibility from the American Association for the Advancement of Science. Many colleges and universities have also used the accident in classes on the ethics of engineering“
– The similarities between government agency mismanagement of events that led to the Challenger Space Shuttle explosion and policy response to the COVID pandemic are striking. Moreover, data increasingly points to a scenario where the pandemic origin may have resulted from government funded chimeric experiments.

For months, beaches, mountains, and parks were closed; but science demonstrates risk is greatest indoors. This type of “lockdown” was not based on science that has long recognized the dilutive effects of outdoor ventilation and reduction of inoculum to non-threatening levels which may even produce immunity without illness. Most transmission occurred in limited ventilation environments such as homes and other indoor areas with insufficient ventilation and long-term exposure durations; while transmission outdoors was virtually non-existent and it’s likely that many who did spend time outdoors statistically contributed to development of natural immunity without ever feeling ill.

Government executive branch “Stay At Home Orders” crafted by health officials and policy makers were put in place for over a year; but the orders were a holistic failure and even the name was horrible messaging. Lockdowns drove people to meet in homes which resulted in greater transmission likelihood and symptom severity that led to over 300,000 US deaths in the 20/21 “flu season” while Dr. Fauci and the CDC unscientifically ignored the reality of deadly transmission through concentrated aerosols in very low ventilation environments such as homes. Options existed to encourage outdoor activity and enable businesses and schools to function more normally by managing ventilation and duration; and it is likely that a substantial percentage of the 300,000 deaths and countless hospitalizations could have been avoided through strong government/media messaging to “enjoy relationships outdoors or in well ventilated environments”.

On 4/24/2020, the WHO stated “There is currently no evidence that people who have recovered from COVID-19 and have antibodies are protected from a second infection”; but this was incorrect. This WHO statement was alarming and falsely suggested that people would not develop immunity. Evidence existed that people who had recovered were developing immunity and many decades of immunology research suggested that recovery from virtually all coronavirus type infections result in very significant protection from future infection.

COVID-19 fatality rates were initially publicized as 3% or higher; but this was incorrect. It was known at that time that many infections were not tracked and the Infection Fatality Rate (IFR) was much lower than the Case Fatality Rates (CFR) of serious infections that were being tracked; but still, this alarming number was widely publicized. Infection Fatality Rates were much lower, on the order of 0.4% and mostly related to very old people in skilled-nursing facilities and people with other complications such as obesity, immune-disorders, and other co-morbidities.

In the early months of the pandemic, it was widely reported that infection by COVID-19 would require invasive intubation as the primary treatment for moderate and severe cases; but this was incorrect. Many doctors immediately recognized this overly aggressive escalation plan / high PEEPs, and resisted the dogma from hospital policy makers, put their careers at risk, and worked to help other medical professionals understand better treatment protocols were available. Faulty dogma at the medical administration policy making levels resisted common-sense protocols that involved high-flow nasal cannula, BiPAP, steroids, Inhaled Cortico-Steroids (ICS) such as budesonide/ciclesonide, and other less invasive treatments that provided a much better medical results with greater survival rates and improved recovery times.

For nearly a year, any death, even resulting from a traffic accident, was expected to be counted as a COVID-19 death if the person tested PCR positive at the time of death; but this is unreasonable. This unreasonable method of counting was acknowledged as early as April 2020 and persisted in Alameda County, California until corrected June 2021. Someone with a COVID-19 positive test result dying from a traffic accident or other causes should NOT be counted as a COVID death.

Dr. Fauci claimed that “worry about variants” was a reason to avoid speeding up 1st dose vaccinations and delaying 2nd doses as the UK, Canada, Germany, and others have done; but keeping the 21/28 day schedule actually increased variants. The “worry about variants” statement was alarming, incorrectly suggested that the 1st dose would not protect against variants, and incorrectly suggested that having only 1 dose would create more variants. But the exact opposite is true: the first dose does protect against variants and that protection reduces total viral replications which results in fewer opportunities for mutation and variants to develop.

When Dr. Fauci’s “worry about variants” was challenged and deemed invalid, his narrative shifted to avoid speeding up 1st dose vaccinations because it presented “a messaging problem”; but this was also not valid. This statement about a “messaging problem” had no merit and assumed people were not capable of understanding the scientific basis of intelligent planning. Other nations chose to educate people on the scientific basis for speeding up dose 1 vaccinations as a means of providing 2x the people with 80 to 90% protection against symptoms and virtually 100% against death.

Pfizer’s MD and PhD authors and NEJM peer-reviewers stated Pfizer vaccine Phase 3 Trial dose 1 efficacy as 52% and led the media to widely publish that number; but the correct values were around 90% dose 1 efficacy and 95% dose 2 efficacy. Somehow, a wide cadre of scientists used a calculation method that started measuring dose 1 efficacy on the same day of vaccination (allowing zero time for it to take effect), incorrectly resulting in a “52% efficacy”, yet the same scientists used a more correct 7 day exclusion period after dose 2; while Moderna scientists used a 14 day exclusion period after both dose 1 and dose 2 in the correct calculations that were provided for the Moderna vaccine. After numerous corrective articles from UK government scientists and a large cadre of other scientists/researchers, the NEJM published a “Letter to the Editor” by two Canadian scientists about 1.5 months after the original/”incorrect” NEJM article – Pfizer, NEJM, and several other vaccine “experts” were slow to acknowledge the obvious and continued to errantly use the 52% number until the correct value around 90% was embarrassingly and ubiquitously prevalent in media and academic circles; this error and policy fault likely led to many 10’s of thousands of US deaths in 2021 that could have been avoided by more rapidly deploying 1st doses of vaccine and circling back for dose 2 after the majority of the population had access to dose 1. Only when the error became a sad laughingstock of the academic community did the NEJM finally take a mediocre step towards correcting the error – why?

A common news narrative questioned the durability of immune response to infection and vaccine; but this was unscientific. A study of the 1918 Spanish flu pandemic done in 2006 showed nearly all of the dozens of very old people studied still had antibodies and immune response against that strain of flu. Immunity, induced by natural infection or vaccine establishes durable B/T memory and LLPC based immunity.

PCR Tests are often cited as showing “positive” for re-infections, vaccine escape, and other scenarios without a Ct count that shows level of positivity; but this may be misleading. A Ct count that is borderline positive may not indicate viable virus or may indicate very low infection levels that are not threatening and CDC guidance has changed over time because initial guidance for determining positivity was far too sensitive, resulting in far too many false positives. “new CDC guidance … says PCR tests should be set at 28 CT or lower.”

Both the Obama and Trump Administrations placed moratoriums on dangerous Gain of Function Virus Lab research; but why did Trump have to re-institute the moratorium? Apparently the NIH somehow skirted the Obama Administration GoF research moratoriums for several months during the Trump Administration only to be shut down again by Trump. A 2018 article “makes the case against performing exceptionally dangerous gain-of-function experiments.”. It concludes that: “the unique scientific and public health value of [potential pandemic pathogens] PPP experiments is inadequate to justify the unique risks they entail and that researchers would be well-advised to turn their talents to other methodologies that will be safe and more rewarding scientifically.”

Dr. Anthony Fauci, who has headed the National Institute of Allergy and Infectious Diseases (NIAID) since 1984, has played a major role in promoting and funding gain-of-function research, both in the US and China and has endangered billions of people. GoF experiments have neither prevented a pandemic, nor provided useful information about safe and effective pandemic countermeasures. Numerous prominent scientists argue that these experiments deviate from morally justifiable research, and the experimentally altered pathogens have put the entire human species at risk.

The lack of genuinely science driven policy has resulted in many ten’s of thousands of US deaths (perhaps as high as a few hundred thousand), countless hospitalizations, and long-term sequelae. Government edicts polarized many 10’s of millions of citizens into political opposition where neither of the polarities used rational critical thought processes and instead engaged in fruitless arguments, physical altercations, useless masking in the open outdoors, and using no caution in poor ventilation environments. Inept policy drove people indoors via the “Stay At Home” orders all around the nation. The larger viral loads encountered indoors tend to increase the viral damage that occurs before the adaptive immune system can respond. We saw cases, hospitalizations, and deaths spike during the holidays as a result. But never did we see any government statements encouraging family gatherings to be done outdoors. Instead, just the incompetent unrealistic mantra, “stay at home and don’t visit with your family”, which was so unrealistic it was widely ignored, while more practical messaging such as “enjoy relationships outdoors or in well ventilated environments” would have met much greater logical understanding and acceptance.

Medical protocols encouraging invasive intubation resulted in a great number of needless deaths. Lack of timely EUA of early-use of light steroids ICS such as budesonide/ciclesonide before too-late-use of heavy steroids such as dexamethasone missed another opportunity to reduce severe cases and death. Ignoring calls from the UK and the at-large medical community to focus on dose 1 distribution and follow-up with dose 2 at a later time prevented timely vaccination that would have prevented further death and hospitalization as shown by the UK real-world data. It also resulted in US hoarding of vaccine that could have better met worldwide needs and further reduced variant development.

While it’s not fully understood how the policy elite could have errored so horribly, it somewhat appears as if far too many health policy makers hadn’t considered a default response based on text book immunology, were too co-mingled with big-pharma, created too many unhelpful fear-based narratives, missed obvious common-sense solutions such as encouraging outdoor recreation, healthful activity, and ventilation improvements; but instead helped foment a great deal of unnecessary mental-illness, civic strife, economic damage, many trillions in national debt, and homelessness.

It is truly a pity that a small group of medical-elites were given such great control and made such large scientific errors in the face of common-sense available to the many who rapidly saw the flaws of these failed policies. Far too little success occurred in striking a balance in developing holistic epidemiologic interventions that consider the effects of these interventions on economic, civic, social, and mental health, which have pathologies within their own realms. Far too little effort was allocated to education that could have empowered people to optimize their personal response and avoid the pitfalls of a one-size-fits-all edict from authoritarians who compounded the error of excess authority with horrible errors in judgement.

Many lives could have been saved if policy makers had used their platform to message something realistic and driven by science such as: